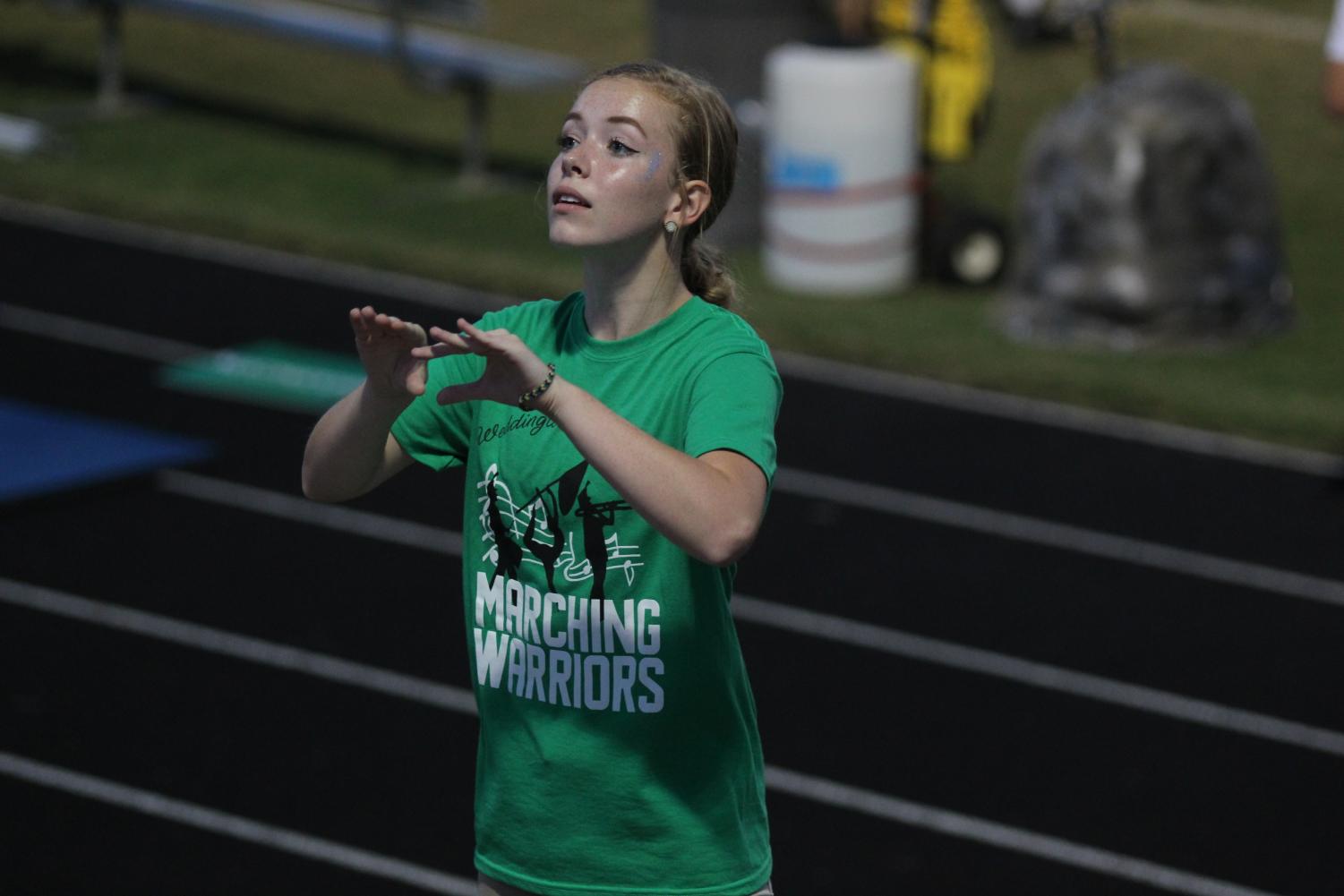 Marching to the Beat of the Warrior Drum

Weeks before school starts, while most students are still working a summer job or enjoying their last few days to sleep in, the Marching Band gather at the WHS band field in the August heat to practice and perfect their half-time routine. The eight hour long days are spent learning music and steps for two weeks straight. And despite what people may think, it takes quite a bit of physical endurance to march in the sun all day while remembering pages of music as you try not to bump into the person next to you. If you still don’t believe that’s hard, ask the tuba players. As taxing as it sounds, Band camp holds beloved memories by many, such as each of the spirit days, competition between sections, and hilarious stories that others could never hope to understand. It all results in an amazing product too, and just in time for the first football game of the year.

On August 17th, students filled the visitor stands at Ardrey Kell High School, cheering for the Warriors as they defeated the Knights 34-16. The game was a typical Warrior win, with boisterous students shaking the stands and the other teams cheers growing quieter and quieter. The commotion of the game wouldn’t be complete, however, without the marching band. Even after a lightning delay, the band continued to pump up the crowd with hits like “Seven Nation Army”, “Bop”, and “Take on Me”.

But even this is nothing compared to a home game, which is when the band gets to truly show what it’s made of. The August 31st game against Porter Ridge was a perfect example of this. As students packet into the Warrior student section, decked out in their best Hawaiian gear, the band marched out into the field to lead the national anthem, a number that each and every student knows by heart, and then plays as the football team rushes through the Green Helmet and onto the field. During halftime the band takes the field once again to perform the number they have been working on all summer. This year’s theme is The Woods, a dark contrast to the rainbow colors and magical music of last season, but just as good in every way. As the band bobs and weaves and the color guard expertly catch flags twirling in the air, the crowd is treated with not only a musical performance, but a spectacular visual one.

As final seconds of the game tick down and another Warrior victory is secured, “The Final Countdown” plays loudly, while the student section chants, “I believe that we will win!” The Football team has won yet another game for Weddington, and the marching band played the soundtrack to triumph.

But the fun doesn’t stop there. In addition to football games, the band has many competitions of its own. At last year’s Porter Ridge Band of Pirates Marching Competition, the band won 2nd place in music, 2nd place in percussion, and 3rd in the class overall, as well as 1st place for Drum Major. The students in marching band spend so much time together that they develop very close friendships, the entire group becoming a family. In fact, Kip Parker, a junior in color guard, says that “community is my favorite part of marching band, because there are so many fun, amazing people and I have made really great friends.” Kip also gives some advice to freshman band members, “Don’t beat yourself up if you don’t get something right the first couple of times. It is really challenging at first, but it definitely becomes easier as you get the hang of it, and so much more fun.”

Kaitlyn Dirr is the returning Drum Major and a senior at Weddington. Being the Drum Major is a challenging job and an honor involving leadership and hard work. When asked about why she chose to take on such a demanding position, Kaitlyn said that “I knew what we could be and knew that someone had to take charge to motivate people to be the best that we can be. I strive really hard to create a positive, welcoming environment and make the kids proud to go out and perform each week.”

She predicts great things for the marching band after she leaves, calling the underclassmen  “a group of talented and highly motivated kids that just love what they do.”

The next home game is scheduled to take place on October 5th. Come out and support the Warriors, and while you’re at it, make sure you cheer for the Band as well.

2 Responses to “Marching to the Beat of the Warrior Drum”