Weddington Beats Cuthbertson to Advance to the Fourth Round 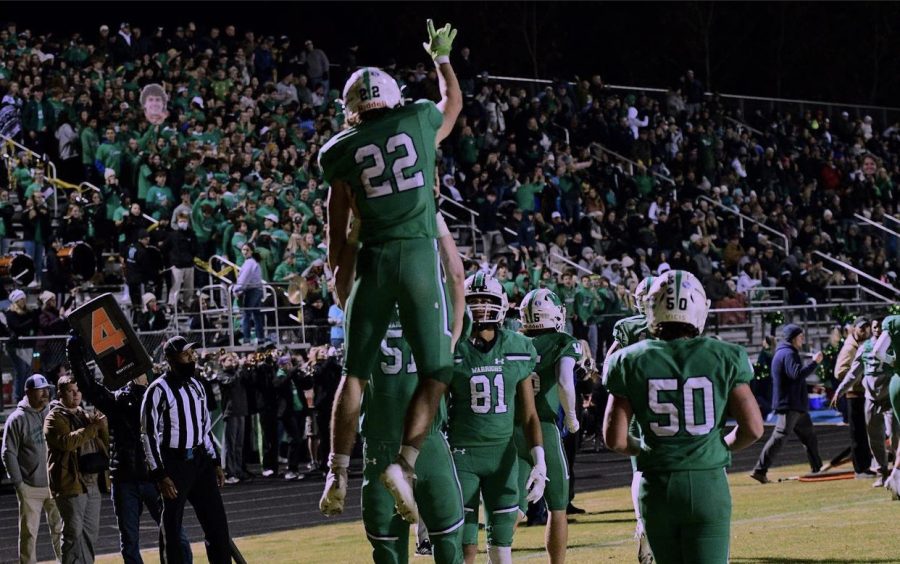 Another week, another Union County playoff match-up. The last time the Cuthbertson Cavaliers came to Warrior Stadium, they fell 28-13. With higher stakes, they came back, ready for revenge. Leading up to the game, there was a lot of heat between the rival high schools. Each made shirts just for the game, one put a glow sign in the front of their campus, and the other painted their rock. With such high tension and high pressure, the stadium was packed for the third round of the state playoffs.

Cuthbertson won the coin toss and elected to receive the football. Senior kicker Matthew Moonan kicked the ball off and the game was underway. Coop Kiehl returned the ball to his own twenty four yard line. On the second play of the game, Ben Gretz sacked sophomore quarterback Parker Burke for a four yard loss. The next play, Zymil Patterson picked Burke off and returned the ball to the Cuthbertson thirty six yard line, establishing the dominance of the Warrior defense early on.

On the drive, quarterback Grady Brosterhous carried the ball for a total of three yards and senior running back Kyle Parsons had an eleven yard carry of his own. However, two incomplete passes lead to a field goal by Moonan, putting the Warriors up 3-0 with 8:41 left in the first quarter.

Cuthbertson began their next drive on their own twenty yard line. This drive was all about senior running back Carson Hegele. He ran for a total of twenty one yards on the drive, but a sack by Ethan Lee stopped the momentum of the Cavalier drive. They were forced to punt the ball away and it was downed at the Weddington eighteen.

A thirty yard pass to senior Landyn Backey set the Warriors up at the Cuthbertson thirty. A pass to Reimer for twenty three yards after a sack helped set Weddington up at the nine yard line. Parsons capped off the drive with a five yard touchdown rush. Moonan’s extra point was good, and the Warriors extended their lead to 10-0 with forty eight seconds left in the quarter.

During Cuthbertson’s next drive, which once again began at their own twenty, the clock wound down and the game entered the second quarter. Senior AJ Colombo had a carry for twenty five yards, setting the ball up at the Weddington thirty. On a fourth down conversion attempt, Burke handed the ball to Hegele, and the senior took the ball into the endzone for a seventeen yard touchdown run. An extra point later, the Warriors still held the lead, except by a score of 10-7 now.

The Warriors drove downfield quickly, with passes to Bryson Dermid, Backy, and Parsons. Ultimately, the drive ended on a failed fourth down conversion attempt, giving Cuthbertson the ball at their own twenty seven yard line. However, a quick three and out, which ended on a sack by junior Jack Collins, finished the drive quickly and the ball was punted back into the Warriors’ hands at the Cuthbertson forty six.

While Weddington got within scoring range, they failed to put seven more points on the board. However, they did add three more to their score, making it a 13-7 game with 1:47 left in the half.

The Weddington defense once again held Cuthbertson to a three and out, this one ending on another sack by Ethan Lee. The ball was punted away again and ended up at the Cuthbertson forty four.

This time, Weddington capitalized on the opportunity. Parsons exploded for a forty four yard touchdown run on the second play of the drive. The extra point was no good, but Weddington held a 19-7 lead going into the locker room at halftime.

Weddington received the kickoff to begin the second half, which was returned to their own forty two yard line by Backey. Parsons broke through the line for another massive carry, this one totaling thirty four yards. Although the Warriors drove down the field, they put three more points on the board, making the score 22-7 with 9:56 left in the third quarter.

Cuthbertson began their next drive at their own twenty eight. Yet again, the Warrior defense did not let the Cavaliers score and the drive ended in a sack by Jack Collins for a loss of seven yards. Weddington’s next drive also resulted in no score.

Cuthbertson took their next drive as a score or bust. They drove right down the field and ended up at the twenty five yard line. Parker Burke found junior receiver Reece Morgan for a twenty five yard touchdown, making the score 22-14 Weddington at the end of the third quarter.

Weddington’s next drive began at their own thirty two yard line. It took the Warriors all of one minute to extend their lead. Kyle Parsons exploded for yet another long touchdown run, but this time the Wofford commit ran for sixty yards. Although the two point conversion attempt was no good, Weddington held a comfortable 28-14 lead with 10:41 left in the game.

No team would score for another ten minutes. Weddington’s next scoring drive was set up by Patterson’s second interception of the night. Forty one yards of offense by Parsons and twenty eight yards of offense by Broterhous set up a thirty five yard touchdown run by senior Stephon Wright. Although the extra point was blocked, the Warriors held a 34-14 lead with 1:43 left in the game.

Cuthbertson ran a less than two minute drill, although the game was more than likely over. The drive ended in a fifteen yard touchdown pass from Burke to Keenan Jackson. After the extra point was made, Weddington still held a 34-21 lead.

Although Cuthbertson recovered an onside kick, the drive was through quickly as Ian McDermaid picked off Burke again for the Weddington defense’s third interception of the night.

The final score was 34-21. This Friday, the Warriors will host Chambers High School in the fourth round at 7:00!